2. The Wabbit shares the Load 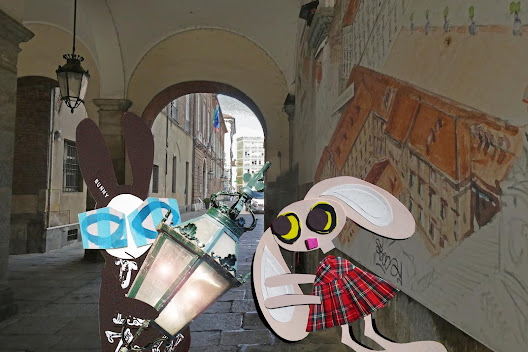 The Wabbit had just helped the lamp down when Lapinette appeared round a corner. "Wabbit you can't just take a lamp, it's illegal." The Wabbit was struggling with the weight. "It's his wish to go, but I'm wishing I hadn't bothered." Two lights flared from inside the lamp. They looked for all the world like headlamps. "That's better, I can see now," said the lamp. "Lapinette was astonished. "What are you up to with this lamp, Wabbit?" The headlamps burned bright and they swivelled back and forth. "I want to escape," shouted the lamp," I'm fed up hanging in that spot. Tourists here, tourists there - with their incessant prattle. Pointing and gawping." Lapinette thought for a minute and then she pointed. "OK, let's move down the road. Try not to look conspicuous." The Wabbit was panting. "Can you take some of the weight?" The heaviness vanished as the lamp started to float on his own. "That's better," it said. "I didn't like that chain at all." Having helped the lamp down, the Wabbit was unsure of what to do and he said so. "So Lamp. Do you have any plans?" asked Lapinette. "I want to see the world," said the lamp, "I want to light it up." The Wabbit snorted. "Knock yourself out why don't you?" Lapinette put her paws on her hips. "That's enough of your cynicism, Wabbit. You helped him and now I'm afraid you have to take care of him." The lamp started to sing. "Light up the globe. Light it right up. Light up the globe. I believe in myself." The Wabbit cringed but Lapinette thought it was cute. The Wabbit remined cynical but knew it was his fault. "Let's go and have a drink and think about it." The Lamp was delighted. "Like tourists!" Lapinette danced forward as only she could. "Let's light the way to a gin and tonic." "Follow that dancer," said the Wabbit.