2. The Wabbit hears of Stefano Pittaluga 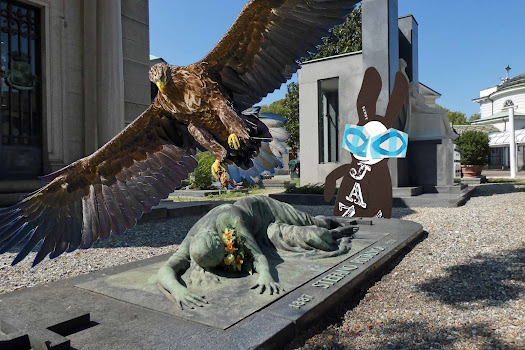 The bird transformed into a magnificent eagle and transported the Wabbit around the cemetery. Then he swooped down and deposited the Wabbit by a graveside. The Wabbit looked at the recumbent statue on the plinth. "This is the grave of Stefano Pittaluga. A cinema impresario who acquired studios in Turin." The Wabbit walked around the plinth. The eagle swooped and dropped down to sit by the statue. "You probably won't know him. He was ahead of his time in introducing sound cinemas." The Wabbit agreed. "You're absolutely right, I never heard of him." The eagle lifted off and swooped around a bit. Then returned to sit by the statue. "He moved to Rome and released foreign films. People loved it." "What happened to him?" The eagle laughed. "He died in 1931, otherwise we wouldn't be here." The Wabbit pointed. "It says there 1932." "Don't believe everything you read," said the eagle. The Wabbit knelt by the plinth. "I can see someone has been here recently." The eagle liked a joke. "Flowers. He's very popular with the old age pensioners." The Wabbit smiled. But he wanted to know who the woman statue was. "I think she was a lady friend," said the eagle. "Oh really," said the Wabbit, "that's show business I guess." The eagle became serious. "Yes, on hearing of his death she came here and prostrated herself by the grave. She wouldn't go away and died of starvation." The Wabbit looked astonished and his eyes widened. The eagle winked. "Not at all. I made that up." The eagle tried for a grin, but only managed to look sinister. The Wabbit considered everything he's heard. "I know a cat who would like to hear of this." "Is his name Felix?" asked the eagle. "No. Skratch," replied the Wabbit. "Silly name," said the eagle.
at September 22, 2021