5. The Wabbit and the Exploding Hole 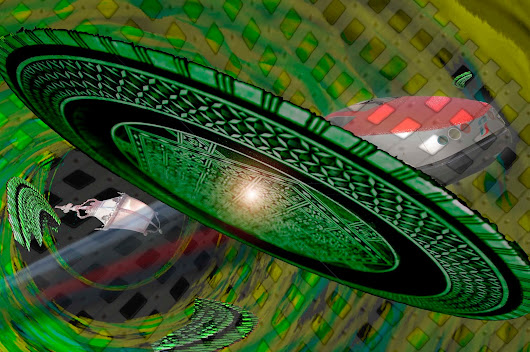 Everything was confusion. The Lamp bolted out the door and stared the green craft down. His headlamps carved their way into the bottom of the craft. The Lamp distorted and flared as the light smashed the vessel. Still it went on. Bits of the craft split and became separate entities while the original craft carried on. Quantum elongated but stayed the same size. The Black Hole filled with colour as bits of both crafts span off and circled round. Inside the craft, the Wabbit and Lapinette warped too but tried to get Lattice Drive back online. There was a clunk as Quantum engaged and he clawed his way out of the hole. "Get the Lamp back on board," yelled the Wabbit. Quantum engaged a tractor bean that pulled at the Lamp and bit by bit he was persuaded back into the cargo hold. Things stabilised inside - but outside, parts of the green craft whizzed past. Lapinette patted the Lamp. "I think you got the measure of him." The Lamp looked pleased, "Can we do it again?" The Wabbit groaned, "Let's get going while the going's good." Lapinette ensured they were free of the Black Hole, and set coordinates for Earth. They looked back. The green craft struggled to free itself of the confusion. The Wabbit stared. "Was that really the Ice Mice?" Lapinette shook her head. "A version of them? Who knows?" The Lamp was astonished, "Friends of yours?" I wouldn't say that exactly," said the Wabbit. They all laughed. Then Lapinette said, "Take us home, Quantum." "The scenic route?" asked Quantum. "We've done the scenic route," laughed the Wabbit. The Lattice Drive crackled under Quantum's wheels and the Wabbit raised his eyes, "Don't spare the horses," he quipped.