2. The Wabbit and the Rabbit on the Roof 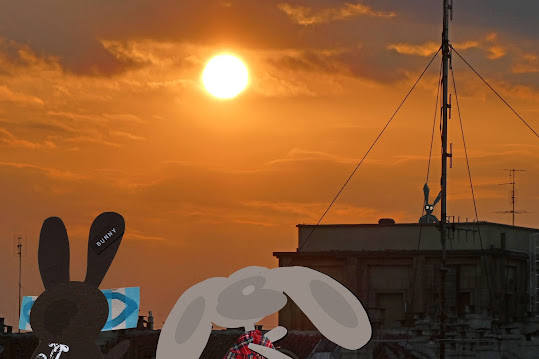 From the Wabbit's apartment, the Wabbit and Lapinette looked over the rooftops It was a fine night and the sun was a gradually dropping ball. Eventually it would disappear behind the mountains and so they decided to watch. The Wabbit was pensive. "It's funny to think the sun will eventually be a red dwarf and we won't be here to see it." Lapinette looked at him sideways. "That's five billion years Wabbit. How long are you planning on staying?" The Wabbit sighed. "Only a million." They watched the sun a bit longer. It was pleasantly warm on the rooftop and they didn't have anything better to do. The Wabbit suddenly chortled. "I'm having a Carlos Castaneda moment. Lapinette looked up and quoted in a quavering voice. "Nobody knows who I am or what I do. Not even I." "I hardly know myself," responded the Wabbit. They were lost in contemplation. A bird landed on an aerial. They nodded sagely. Then the Wabbit saw something else. "Isn't that a rabbit over there, looking back at us." He focused on it. "I'd say that was an Agent of Rabit." Lapinette grimaced. "He's far away. Better we're over here looking at him, and he's over there looking at us." "Not normal," said the Wabbit. Every strand of fur stood up on his neck as a voice spoke. "Don't move. Both of you put your weapons on the floor. Then put your paws in the air." The Wabbit didn't flinch. He and Lapinette complied. "Can we sing the Hokey Cokey?" said the Wabbit. "And turn around?" said Lapinette. They both waved in synchrony. The rabbit on the rooftop opposite waved back. "Don't wave back, you steaming fool!" shouted the voice ...
at May 24, 2021