2. The Wabbit and the City Drive 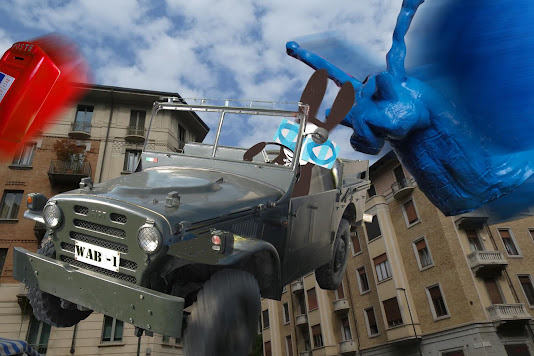 The Wabbit was enjoying himself. He steered his jeep through Torino as if the Hounds of Hell were on his tail. But it was Mo that was on his tail. Mo's shell spun wildly and gave him more than enough speed to follow the Wabbit. A smile creased the Wabbit's face. He hoped his mad driving would bring the culprits out from the shadows. If they'd taken To, there was every chance they'd try for Mo as well. He found himself by Crocetta market, which he had on his list. "Oi there, Wabbit," yelled Mo, "what you usin' for brakes on that thing?" The Wabbit didn't have anything much in the way of brakes. He'd meant to get them fixed but that was yesterday. He contented himself by using the engine, which had the advantage of being very noisy. Squeals and roars bounced from buildings and flew high into the rooftops. The Fiat Campagnola also had massive torque and the Wabbit used all of it as he swerved round market stalls. He cut a corner a bit fine and a letterbox flew into the air. "Cool," yelled Mo. The Wabbit mentally prayed the box been recently emptied. He span the wheels. "See anything suspicious," he yelled. "Every bleedin' thing's suspicious," shouted To. The Wabbit grinned and shot into the air. "Illegal chop shops!" he yelled. "I ain't hungry," screamed Mo. The Wabbit slewed past a gaggle of teenagers and he heard them cry, "There's the Wabbit with his retro-fitted snail." That pleased him because he knew it would draw interest. "Now we'll find them," he shouted. Mo slowed a bit. "Over there! Look!" The Wabbit glanced to the left as a familiar figure leapt into the passenger side.
at May 08, 2021