6. The Wabbit and the Warehouse Boom 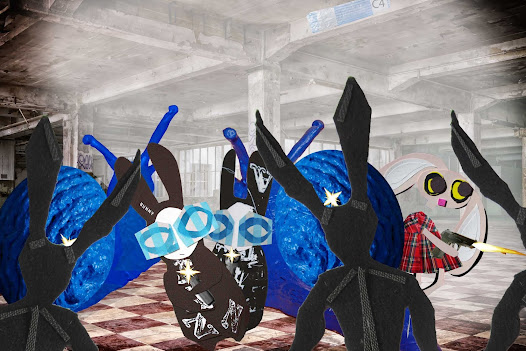 To was brought back to normal - or abnormal as he called it. Wabsworth was relieved of back up and brought Mo in to reunite with To. But the minute they started chatting, they had visitors. Alerted by the Fugues, the Agents of Rabit came storming in for revenge. They were furious and it looked like the Wabbit was taken by surprise. Nonetheless, he and Wabsworth pulled out automatics and rained a hail of bullets on their unwelcome guest. The noise was deafening in the old warehouse. Lapinette emerged from behind Mo and she brought one down immediately. Any fire from the Agents bounced harmlessly from the shells of the MoTo snails. "Eat lead, Agents," shouted the Wabbit. "That's a cliche!" yelled Wabsworth. "That hurt!" yelled an Agent. Dust clouded everything as the Wabbit signalled a retreat. The snails were impervious to anything and they sniggered their way to the exit talking about it. The Wabbit paused and put something in the rafters. "A little present," he chuckled. Lapinette walked backwards and away from it all. Occasionally her automatic flared. Usually there was an answering cry of pain. When they were outside, the Wabbit gently pushed the sliding doors closed. Inside it sounded like a battle still raged. The Wabbit laughed and bared his 28 teeth. So did Wabsworth - and Lapinette did likewise. It was a lot of teeth to bare. As they scuttled for the jeep, they heard an enormous roar as the building collapsed to a pile of rubble. "Business is booming!" quipped the Wabbit