5. The Wabbit and the Mechanical Fugues 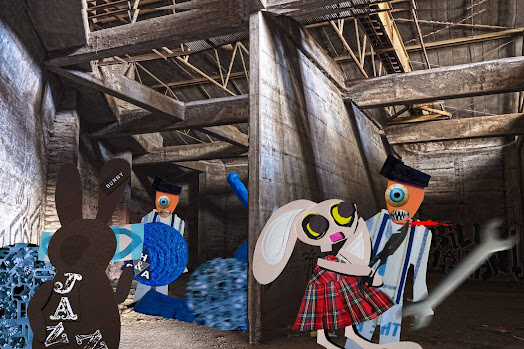 The Wabbit could see something was happening to To's shell. The inner workings were exposed and copies had been made. "Attention," he cried, "this is an inspection for the Health and Safety. All work ceases immediately." He thought for a second. "By order." A creature was holding the outer casing. "Whose order?" His voice was rough. "My order," added the Wabbit. He strode even further forward and held up a badge he'd found in his fur. Just beyond his sightline, Lovely Lapinette listened carefully as a workman with a spanner crept up. She stayed silent, waiting until the last possible minute. Then she turned and slashed with her edged weapon. It was a wide, curving blow and the knife found its mark. His throat began to bleed profusely. The spanner spiralled into the air and landed with a loud clatter. "Aaaagh!" he cried and clutched his neck. "It's only a neck wound," said Lapinette. The Wabbit gritted his 28 teeth. "You two have a lot to answer for. Who are you working for?" Lapinette had the Wabbit's attention by this time. "These look like the Fugues we met in the metro. Remember when we were The Wabbiors." She pressed the blade into the neck of the hapless Fugue. The Wabbit strode up and down, pausing by the second Fugue. He looked at him straight in the eye, then kicked his ankles. The Fugue dropped like stone. "Aargh, you've broken my leg." "Names!" yelled the Wabbit. "We don't have no names." The second Fugue spluttered as he writhed on the workshop floor. "They looked like rabbits though." The Wabbit glanced down and made to kick his ankle again. "Tell them we're coming." He signalled to Lapinette. She tucked the knife away, but took out her automatic and waved it around. "Run!" she scowled.

[Background by Michael Gaida of Pixabay]