3. The Wabbit and the Unpleasant Visitor 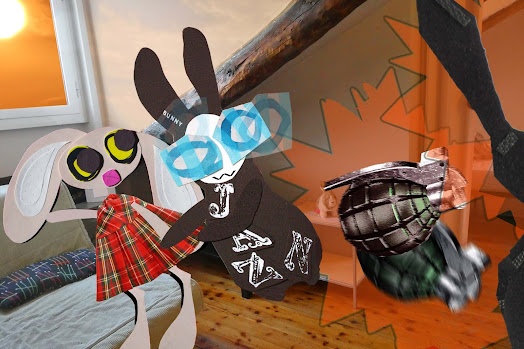 It was unexpected. One second he was looking at an Agent. In the next a grenade came spinning into the room. The Wabbit threw Lapinette to the side. The explosion was swift and fierce and the Wabbit  tumbled to the floor amidst a shower of debris. But he'd missed the best part of the blast and he picked himself up and threw himself at the door. The Agent of Rabit had already left and was racing down the small flight of stairs that led to the lift. The Wabbit heard the elevator door clang shut. He shrugged, then picked Lapinette up and shook his fur free of dust and bits of glass. Lapinette was dazed. "I didn't expect that," she slurred. "Neither did I," admitted the Wabbit, "it's just not the Agents' style." He looked around the room and shook his head. "How am I going to explain this to the landlord." Lapinette grinned. "It's the least of our worries. How are we going to find this pair of rogues?" The Wabbit picked up pieces of ornaments and thought. "What do we know about them?" he mused. Lapinette sat on what was left of the sofa. "Less than they know about us." The Wabbit sat down beside her. "We'd best relocate." He ground his 28 teeth. Lapinette thought hard. "There's my place but probably they know about that too." They both thought of the safe house at the same time. "It's a bit chilly," said Lapinette. "Less chilly than being dead," said the Wabbit. Lapinette agreed. "Let's go there and build a fire. Make plans." The Wabbit contemplated. "I'd phone ahead for Prosecco, but I'm not certain things are secure." "I think I left a bottle in the fridge," said Lapinette. The Wabbit smiled. "You'd be prepared in a sinking ship." Lapinette grinned. "That's because I make lists."