4. Wabsworth and the Dart's Flight. 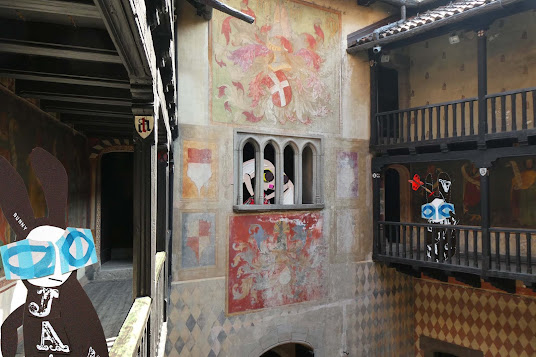 The Wabbit strode up and down the castle ramparts trying to think. "Who would attempt an assassination?" Although his enemies were many, no-one came to mind. He suddenly noticed a commotion from the minstrels' gallery and turned round. It was Wabsworth, his android double, with giant dart sticking from his head. Synthetic blood ran down his face. The Wabbit caught sight of Lapinette as she rushed to see what was going on.  "It doesn't hurt," said Wabsworth, "but it makes me look like an idiot." The Wabbit crossed to the gallery and tried to get the arrow out of his skull. It just wouldn't come out. "I think it's a radio transmitter," said Wabsworth, "I've stopped it downloading anything for the moment." Lapinette looked at the Wabbit. "This needs your careful paws." The Wabbit rummaged in his fur and took out what looked like a bottle opener. "Hold still," he said. The tool clamped around the dart and he gave it a smart tap. The dart fell free. The Wabbit lifted it up and carefully dropped it into the fountain that lay below. "Download that!" he grunted. Lapinette dabbed at the small wound, but it closed on its own. "What happened?" she asked. Wabsworth smiled. "Surprise attack. I was making my way along Madama Christina when two deranged rabbits stepped out. One threw this at me. I got dizzy and fell over." He was a little embarrassed. "Then they vanished, so I came here." Lapinette laughed. "We got the grenade attack. We were stunned. Might be the same pair." Wabsworth thought for a minute. "That dart was full of anaesthetic and it did work on me." The Wabbit sighed. "Sounds like the Ether Bunny."

[Image of dart. PIR04D of Pixabay]