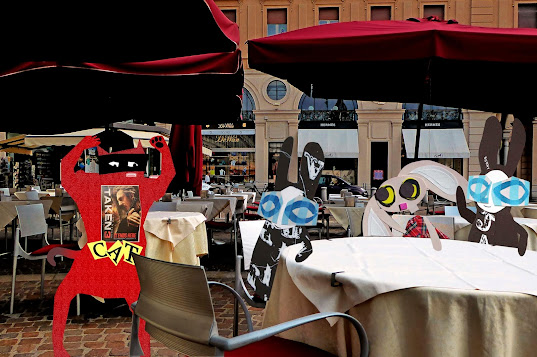 The team found an excellent establishment and were waiting on service. As usual, Skratch the Cat liked to make an entrance - and he did so with gusto. Raising two paws in the air he cheered. "Well done you three! A Splendid Adventure." The Wabbit leant back in his seat and waved. "That's a relief, Skratch. Your seal of approval is welcome!" Skratch clapped both hands together and mimicked a seal. "Roink roink," he barked. Lapinette couldn't wait. "Tell us Skratch. What sort of Adventure did we just have?" Skratch rubbed his paws together. "This kind of story demands a suspension of disbelief. We've only your word that trafficking in modified snail parts is as described. It's largely down to cultural influence on fiction." Wabsworth chortled. "I didn't think there were any other snail parts stories going around." Skratch also chortled. "Just substitute anything at all for snail parts. It's all the same deal." Wabsworth nodded sagely. "Snails are indeed a valuable commodity in the postmodern world." The Wabbit looked anxiously around. "Perhaps the waiter has been kidnapped." Skratch shook his head. "Legal conventions in fiction demand a ransom note written in a crude hand and bearing several spelling mistakes." The Wabbit shook his head even more. "Nothing so flamboyant has been received." Lapinette tried to get word in. "In our story, there were no ransom notes." Skratch paused. "The story was not about extortion. It was about patent theft." The Wabbit agreed. "We stepped beyond codes and convention." Wabsworth gave a boisterous yell. "Give us back our codes!" The Wabbit went further. "We will find them." Lapinette thumped a fist on the table. "And we will apply them."
at May 20, 2021