1. The Wabbit and the Elegant Painting 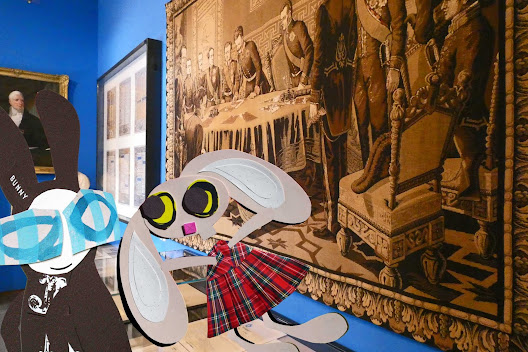 The Wabbit was between missions and he was bored. So, just for fun, he hopped through the Museo del Risorgimento Italiano to see what was old and interesting. He stared fondly at the painting and imagined himself in it as he always did. In his mind he was an important figure signing something of great importance. But the Wabbit preferred to be behind the scenes, leaving all that signing to others. "Hello Wabbit!" Lapinette jumped in front of him and onto a display case. The Wabbit grinned. "I don't think you're supposed to be on top of that cabinet." Lapinette knelt on the case. "Call the police! Someone arrest me." The Wabbit laughed. "This is the room of the constitutions!" "I'll bet they protected my right to kneel on ancient artefacts," said Lapinette. The Wabbit didn't disagree and Lapinette knew he didn't dare. "I suppose you were imagining yourself in the picture," she said, "You were imagining yourself at the head of a vast revolutionary army." The Wabbit looked down at his fur and back up again. "I was rather," he admitted. "Think of the argumentation and the political whatnot," said Lapinette. She jumped up and pirouetted. The Wabbit thought exactly that. Deep down, he knew it wasn't for him. He pointed to the picture. "Do you see that empty chair?" Lapinette nodded. "I could be in that chair watching and when everything's over I incline my head sagely and leave." Lapinette sighed. "You wouldn't Wabbit, you'd have an argument with someone and be forced to leave at gunpoint." The Wabbit giggled. "With a price on my head."
at May 21, 2021