3. The Wabbit and the Three Fugues 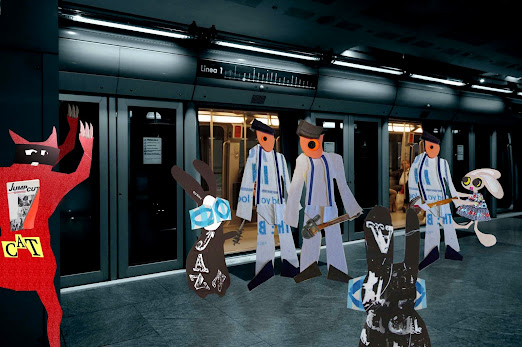 They made good headway but the Fugues beat them to it. The Fugues were no pushover. Despite poor memories, Johnny, Wolfie and Luddy were as case hardened as they come. Wabsworth was the designated stooge and he hopped foppishly towards them. For their own part, the Wabbit and Lapinette were annoyingly distracting. The Fugues swung their thuggish weapons in various directions. "Our Turf!" they yelled. Wabsworth smiled sweetly. "We're The Wabbiors. We're passing peacefully through your turf. What's it called?" Johnny looked at writing on his cuff. "This is FugueVille. You're dead rabbits hopping." "We're not all rabbits," said Wasbworth cheerfully. Three metallic clicks echoed along the platform and back. "Snick. Snack. Snoo," meowed a feline voice. Johnny and Luddy stepped back. But not Wolfie, who brandished a hammer. "You caused the storm!" The Wabbit poked Luddy's cudgel in an investigative manner. "Nope," he murmured convincingly. "That was the Superga Hillbillies." Luddy checked his cuff and looked up and screamed. "I hate Hillbillies!" "So do we," smiled Lapinette. She patted Wolfie's hand and detached his hammer. "Just trying to get back to our turf," said Wabsworth, darting for the train. In the momentary confusion, Skratch the Cat took advantage and leaped out. Slashing claws carved the sign of a "W" in the stale subway air. "That's my train," he hissed. Then he jumped. The doors hissed shut and they were gone. The Fugues looked at each other blankly. "Something happened?" said Wolfie.
at November 23, 2015