6. The Wabbit and the Red Bag Creatures 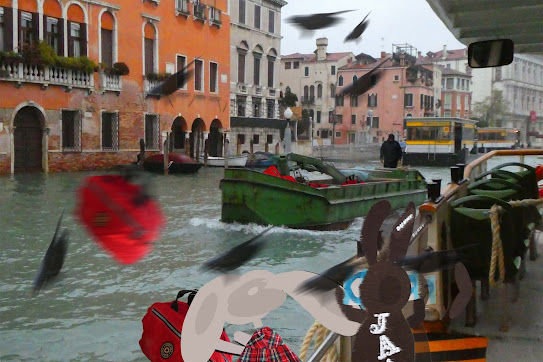 The Wabbit and Lapinette carefully sealed the creatures in the red bag and set off in search of the figure. They boarded a number of vaporettos and scoured the canals. The rain become heavy, and they were just about to call a halt when the water foamed and a noisy craft approached. It was a dirty, oily green and sported a heavy industrial crane. Steered by a dark figure, the ghostly barge cleaved a path through the murky waters with a cargo of red bags - all identical to the one they'd taken from the cloaked figure. "Looks like our opportunity," said the Wabbit, "Let's give him back his bag." He gestured with a paw. Lapinette leaned over the side, swung the bag three times then let it go. It sailed towards the barge in a graceful arc. But just as the bag reached the apex, the creatures broke free and flew in all directions. The air was thick with them. At first sight they looked like a flock of crows but the Wabbit knew better and he yelled, "Take cover!" He ducked, but they dove straight at the Wabbit, squealing as they came. Amidst the deafening noise, Lapinette tried to drag them away - but there were many. The barge drew alongside, and the cloaked figure's voice cut through the clatter of the engine. "Satisfied now, Wabbit?" He snapped a finger. The creatures broke off their attack and soared around the figure at the helm. With a burst of speed, the barge surged past and round a corner, followed by the creatures. The Wabbit picked himself up and raced to the vaporetto's hatch to yell at the pilot, "Follow that barge!"
at May 11, 2020