3. The Wabbit and the Looming Clouds 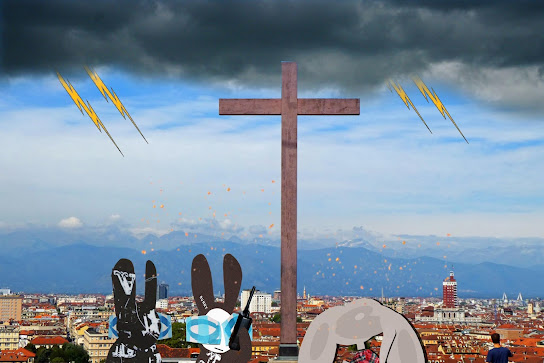 Wabsworth and the Wabbit met Lapinette on the Monte dei Cappuccini because of the gathering clouds. Clouds and lightning over Torino were far from unusual but the day was fine, and no storm was predicted. They clustered around the Big Cross - which, by special arrangement, doubled as a radio transmitter for the Department - and looked up. The cross shook with every bolt of lightning and showered sparks on their heads. The Wabbit's ears curled. "This is something to do with everyone being frozen, but I can't figure out what." Lapinette gazed at the clouds. "These look artificial. It might be the Ice Mice." Wabsworth shook his head. "It's hardly their style. They like Big Weather." The Wabbit had an idea. He fished in his fur for his walkie talkie and contacted the Department. "Patch me through to Marshall Duetta Spyder. Encrypted transmission." The radio crackled and whined. "Marshall Duetta. What can I do for you Commander?" The Wabbit smiled a wry smile. "Can you fly your spiders into that cloud formation?" The radio whined again. "With enormous pleasure Commander. Do you want anything smashed, crashed, bitten, poisoned, infected or otherwise compromised?" The Wabbit bared all of his 28 teeth. "Not yet. Just have a look." He heard the rustling of spider legs. "On our way," hissed Duetta. Wabsworth glanced sideways at Lapinette and caught her eye. She grinned and murmured, "Always with the subtle approach."
at May 25, 2020