8. The Wabbit and the Letter in the Bag 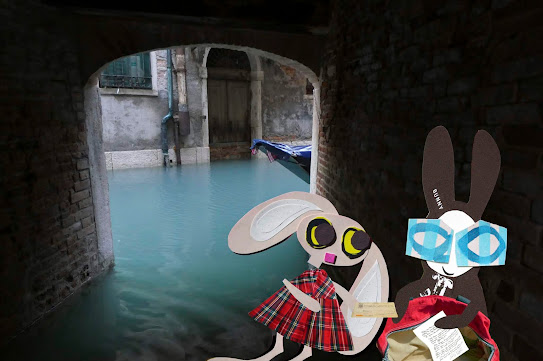 They parked the launch in a secluded canal and waded through the water. The Wabbit carefully unzipped the bag, but there were no creatures. There was hardly anything at all. "What's that?" asked Lapinette. She pointed to a sheet of paper, tucked in the lining of the bag. The Wabbit plucked it out and held it up. "It's a letter," he said. "To us." he added. A rectangular piece of cardboard detached from the letter and Lapinette grasped it. "A railway ticket to Turin." The Wabbit shrugged and scanned the handwritten letter. "Looks like it's from our cloaked figure. He says thanks for all the fun, he had a great time. He invites us to come again." Lapinette looked at the cardboard. "And this is a rail ticket to Turin." "Yes," said the Wabbit, "The rail ticket is for your return trip. He says I don't get one because I was already here." Lapinette sighed. "Our cloaked figure is a bit of a spooky joker." "And spookily mean," said the Wabbit. Lapinette laughed. "Venice is a creepy place is it not." "Jeepers, creepers," shivered the Wabbit. He upended the bag and shook it - but there was nothing more inside. He placed the letter back in the bag. Lapinette dropped the ticket in too. "I'll get my own ticket, thank you very much." "Most wise," said the Wabbit. He zipped up the bag and placed it in the water. Lapinette gave it a push with a foot, propelling it into the gloomy waterway. It swirled three times, then half-submerged it floated out of sight. "Don't look now?" grinned the Wabbit.
at May 15, 2020