4. The Wabbit, Lapinette and the Big Swap 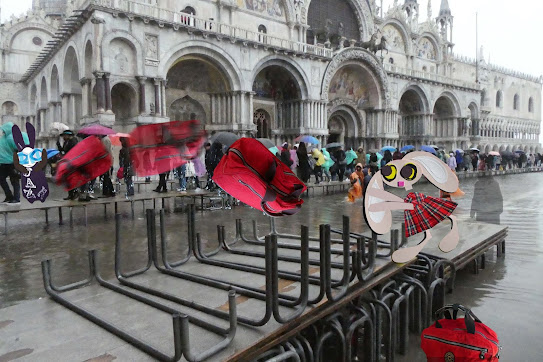 It was a rain-soaked, dismal day and people waded across Venice as best they could. The Wabbit and Lapinette hated rain since it sullied their fur, but nonetheless they cast around for an appearance of the red bag. Late in the day they spotted it, half afloat under stacked tables in Piazza San Marco. "OK, here goes," said Lapinette and she sprang onto the tables carrying the substitute bag. The Wabbit glanced around for the cloaked figure but there were so many people and so many umbrellas, that he couldn't spot him. The red bag was there so he knew he had to be around, but where? Lapinette dropped her own bag into the water and fished out the other bag. She sensed something at her back, and turned to look round. Nothing. There was no figure, only a feeling that made her fur stand on end. She shook off the feeling like a dog throws off rain and with all her strength she punted the bag towards the Wabbit. It spiralled through the air towards the Wabbit's waiting paws. People brushed all around the Wabbit in a grumpy fashion, bumping into him as they plodded along the raised platform. No-one wanted to slip off into the murky flood, so they took no notice of a rabbit waiting for a red bag, or of a spiralling bag twisting in the air. The Wabbit reached like a goalkeeper and clutched the bag to his chest. "Oomph!" he grunted. It was then that he noticed the figure rising from the water. It didn't seem to see him. It was more interested in getting the red bag. The figure raised a finger and beckoned - and the bag floated towards him. "Bingo!" muttered the Wabbit.
at May 06, 2020