3. Lapinette and the Substitute Bag 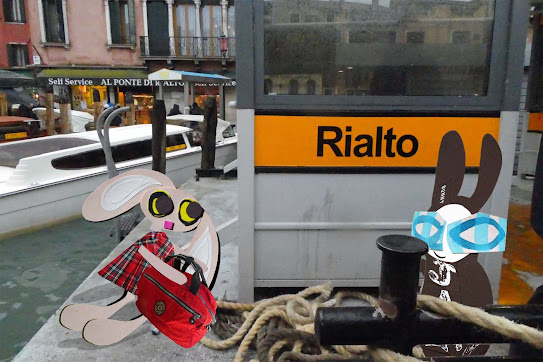 The Wabbit just could not let the matter lie. It was imperative to get to the bottom of the business with the red bag and he'd had an idea. He contacted Lapinette and asked her to find a duplicate bag and bring it to Venice. Lapinette scoured all of Turin for the appropriate item - and having found something that looked like the bag described by the Wabbit, took the first train. The Wabbit said to meet at the Rialto vaporetto jetty and that was where she found him. "Psst," whispered the Wabbit, "round here." He'd tucked himself well behind a kiosk and Lapinette nodded approvingly when she couldn't see him. "I've got the bag," she said in a hushed tone. She threw it over to the Wabbit, who caught it and examined it closely. "Why all the secrecy?" she asked. The Wabbit explained about the vanishing bag and the spooky figure and added, "Next time I see the bag I'm going to try to exchange it for this one." Lapinette grinned. "Not without me, you won't." The Wabbit nodded in agreement. "Maybe you can distract the figure?" Lapinette looked excited. "What does he look like?" "Just a figure," said the Wabbit. "No face?" said Lapinette. "He has kind of a hood and cloak," said the Wabbit. "No dagger? smirked Lapinette. "Not that I know of," answered the Wabbit. Lapinette tapped her frock. "I brought mine anyway." "Just in case of trouble?" commented the Wabbit. "I bring my own trouble," smiled Lapinette ..
at May 04, 2020