4. Marshall Duetta and the Cloud Entity 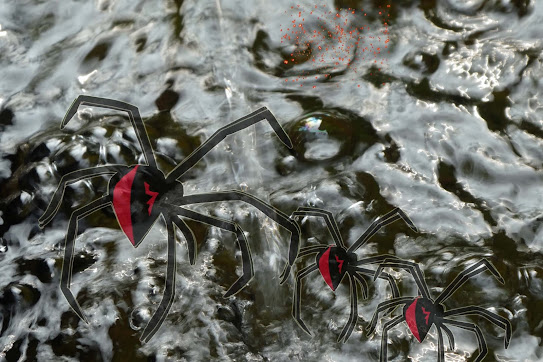 Marshall Duetta Spyder took two trusted lieutenant colonels and circled the cloud several times. Lightning crackled above them, laced with an acrid electric smell. From outside there was nothing, so Duetta nodded and they moved inside the cloud. At first it was hard to see much, and a swirling mass exerted a constant pressure on their bodies, making it tough to move around. Gradually, their eyes adjusted to an inky mottled atmosphere. Just up ahead, a formation of yellow sparks blinked in a periodic sequence. They drew back a little, then Duetta called the Wabbit on a telepathic frequency that patched straight through to his receiver. "Commander, can you hear me?" Her legs rattled. "You're a bit muffled," said the Wabbit. Duetta peered around. "I'm not surprised, Commander. This is no cloud, it's an entity." There was a long silence. "Commander!" said Duetta. "Sorry," replied the Wabbit, "I was thinking." Lapinette's voice spoke across the void. "Is it hostile?" Duetta rattled her legs. "Not up to now." She nodded a lieutenant forward towards the yellow sparks but he shot backwards at speed. "It's defensive," said Duetta. The Wabbit voice crackled. "Have you tried to communicate?" Duetta and her spyders rattled her legs together. The noise was deafening. Yellow sparks threshed and blinked. Pressure increased and began to crush their abdomens. Duetta signalled and together they backed away and out of the cloud. Duetta hummed as she went. "Stormy weather..."
at May 27, 2020