2. The Wabbit and the Stationary Bus 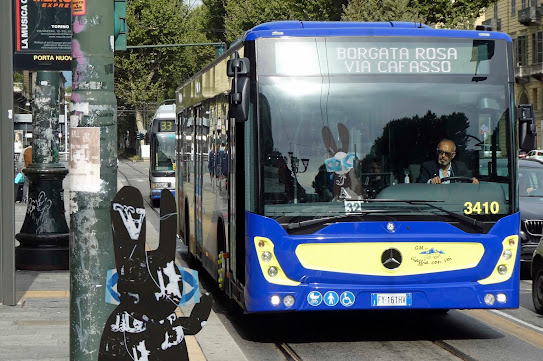 When they reached Piazza Carlo Felice, it was clear the whole city was affected. Everything was at a standstill. But several buses were parked near the hotels and the Wabbit thought he'd try his luck. Closely observed by Wabsworth, he jumped on the one with a driver. "Hello," he said. The driver appeared to lean towards him. "Perhaps you could tell me where this bus is headed?" There was no answer and the driver remained where he was. His papers lay strewn on the dashboard. A cup of coffee sat nearby. The Wabbit sniffed it. It was lukewarm. He looked back to where a few passengers sat motionless. Wabsworth peered in. "What's happening?" "Nothing," shrugged the Wabbit. A few people stood rigid in the street. "Uncanny," muttered the Wabbit. His radio crackled so loudly in the still air that he nearly jumped out of his fur and he snapped, "Commander Wabbit, go ahead," The voice was silky sweet. "It's Lapinette, copy." The Wabbit grinned an enormous grin. "OK Lapinette, copy all that coffee." The radio crackled again. "Have you got a situation?" Wabsworth waved to the Wabbit and the Wabbit waved back with his radio. "We do," he shrugged. "Then maybe your situation is our situation," said Lapinette. The Wabbit nodded. "Everything is at a standstill. It's locked down tighter than a potter's socket." "Wabbit, that's rude!" yelled Lapinette. "These are rude times," said the Wabbit. "I'll get the team," sighed Lapinette. The Wabbit lifted the radio again, "Why aren't we affected?" The radio whined and Lapinette spoke again, "We're a whole different species."
at May 22, 2020