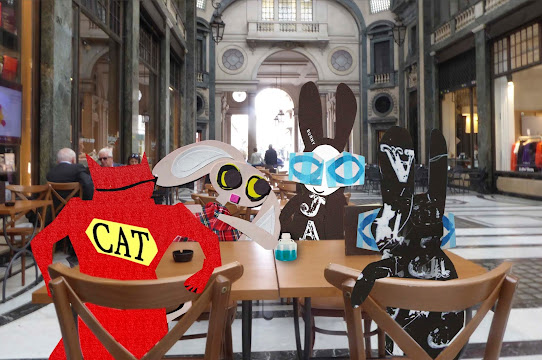 It was fun and games at the Adventure Caffè. Wabsworth produced a vial and told everyone it was full of bad dragon drops. No-one believed him and they all pushed the vial around. The Wabbit laughed and laughed. "But what sort of adventure was that what we just had?" he asked. Skratch leaned back and draped a paw across the back of his chair. "I'd say it was irreal." Wabsworth draped his paw in exactly the same way. "As opposed to unreal?" Lapinette poked the vial again. "Dragons are real enough and symbolic too." Skratch meaowed long and hard. "Then your story was but a structure of signification." Wabsworth was now quite excited. "A concept signifies - but a thing is expressive and a dragon is a thing." Lapinette span the vial round and round. "That's Metz. And he would want to know what kind of dragon thingyness you mean." Skratch butted it. "Your story sequence of images is a horizontal fluid discourse in which thingyness occurs." The Wabbit rapped on the table and the flask jumped up and down. "Therefore our episodes present a sequence of discontinuity which mobilises discourse through construction." Lapinette shook her head because it was beginning to spin. She was getting thirsty and felt in need of a drink. "Wabbit, sometimes you go to far." The Wabbit looked at Wabsworth. "I take it that vial no longer contains bad dragon drops." Wabsworth snatched it back and grinned. "Well I wouldn't recommend drinking it!
at April 06, 2020