1. The Wabbit and the Tram Stop 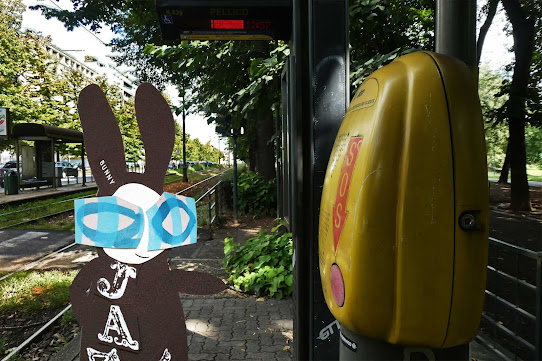 The Wabbit waited at the tram stop a long time and eventually he got bored. It was so long that he wondered whether all the trams were cancelled. Things seemed too quiet, but it occurred to him that it had already been a busy year for mild peril, in which he'd encountered Tremor worms, monster fish attacks and bad dragons. Maybe it was OK to be quiet for a while. He hopped up and down the platform, hoping his radio would crackle into life. Nothing came through. He studied everything intensely, but eventually he found himself reduced to counting fence posts. "May as well walk," he thought. It was then that he spotted the yellow box and he was uncertain why he'd never noticed it before. He looked it up and down. It had a red button and a loudspeaker so he stretched out a paw. It lingered over the button. "To press or not to press?" he mused. He looked at the arrow that said stop. "What's the worst that can happen?" he murmured. It was a short jab but it was effective. The speaker shrieked with a deafening alarm and voice spoke. "What would you like stopped?" The Wabbit covered his ears and yelled, "Stop the alarm please." The alarm stopped and the loudspeaker barked. "Anything else you'd like stopped?" The Wabbit thought of lots of things, few of them practical. "I'd like a tram to come." The speaker barked again. "It's not my job to start things, only stop them." The Wabbit considered. "Maybe you could stop me being bored." The speaker chuckled in a malevolent tone. "No problem, Commander Wabbit ..."
at April 08, 2020