5. The Wabbit and the Train to Nowhere 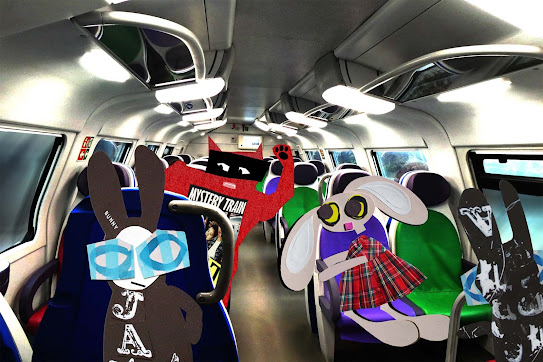 The Wabbit climbed the stairs to the to the upper compartment. He flopped down, but soon realised he had company. "Wabbit!" yelled Lapinette, "What are we doing here? Is this one of your stunts?" He heard a meow from behind him. "What's going on?" purred Skratch, "I was about to watch a film." Lapinette was breathless. "I was collecting wood for your shed when everything shook and I ran and now I'm here." The Wabbit shook his head and he scowled. "Well, the tram was late so I pressed an intercom thing on the platform." They heard the clang of approaching steps. Wabsworth appeared from the lower compartment, moaning as he climbed the stairs. "I was having a quiet diagnostic when I found myself spatially dislocated." The train swayed and he grabbed the rail. He pointed at the Wabbit. "This is your fault, isn't it?" The Wabbit dismissed him with the wave of a paw. "Not guilty," he shrugged. The train got faster. Skratch looked out but stations, poles, pylons and trees blurred past. "This is the back of beyond." The Wabbit nodded. "That's more or less what the guard said." Lapinette jumped up and down. "You met a guard!" The train's PA system crackled into life. "This is the Guard. We are now approaching the station after the one before." A station blurred past. "We didn't stop!" yelled Lapinette. The PA crackled again and the Guard spoke. "There are no further stops of this train. Please have your tickets ready." The train rattled onwards ..
at April 17, 2020