7. The Wabbit and the Emergency Brake 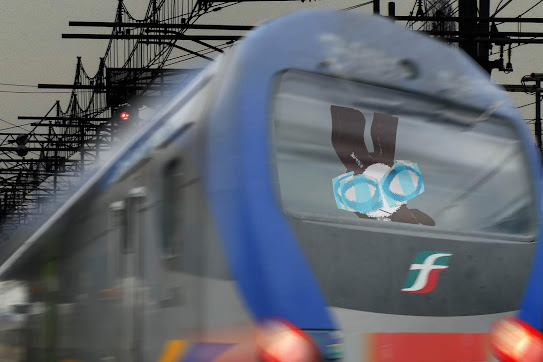 The Wabbit dived into the cab and searched for the emergency brake. He pulled every lever he could but the train still rumbled on. The brake handle was stuck and the dead man's switch was nowhere to be seen. He tried brute force and ignorance but that didn't work either. The train roared down the tracks at enormous speed. Vibration shook every bone in his body. He slumped down on the seat - and felt something give way. So he threw himself on the floor of the cab and groped underneath with both paws. There was something there - a red switch, jammed with a brick. He tried to dislodge it, but the switch stuck fast and every attempt to loosen it made things worse. The Wabbit jumped up and down on the seat to no avail. He sat down and gazed through the windshield. The tracks looked like a maze. Stations strobed past. A train loomed in front, but they passed straight through it. "OK. Plan B," shrugged the Wabbit. He rummaged through the cab and pulled out everything he could. Then he searched the compartment behind. "Aha!" he breathed. Standing in the corner was a wrecking bar. He seized it and lurched to the front. Then with a mighty cry he swung the bar under the seat like a scythe. The seat toppled off its plinth. "Grrr," growled the Wabbit and he set about the jammed switch with both feet. It came off too. But he felt the train slow. Then he heard a squeal and smelled the acrid odour of burning brakes. He grinned and muttered to himself. "This is the next stop of this train. Please ensure you take your belongings with you."
at April 20, 2020