5. The Wabbit and the Last Bad Dragon 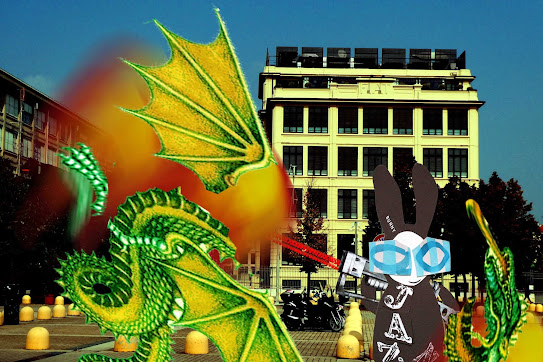 The Wabbit wandered through a strange landscape, clearing up bad dragons. Without their leader they were a spent force and the 400 Rabbits took care of most of them. But an enclave remained in Lingotto and since the Wabbit was especially fond of the area, he'd gone to supervise. With a happy heart, he slung his Snazer gun over his shoulder and whistled a merry tune. The atmosphere was yellow with dragon fumes but now it was clearing and that's how he came to see the shadow. With a terrible roar, a shape loomed over his shoulder breathing fumes. The Wabbit didn't bother to turn. With his paws behind him he pulled the laser's trigger and it fired a salvo that blasted a dragon to shreds. Bits dropped all around him and all over the car park. The Wabbit found himself looking down as a severed head with a tongue that continued to snake in and out as it tried to speak. The Wabbit shrugged because he was tired of bad dragons. "Any last words?" The tongue waggled to and fro. He nudged the dragon head with a foot and it rolled back and forward like a football. The Wabbit sighed. He took the Snazer from his back and pointed it. The head lurched forward and its tongue moved once more. This time it spoke. "We'll be back." The Wabbit leaned forward to look it in the eyes. "And on that occasion, we'll be ready." The eyes closed. The tongue lay still. The Wabbit shrugged again. "I hope .."
at April 03, 2020