9. The Wabbit and the Red Button 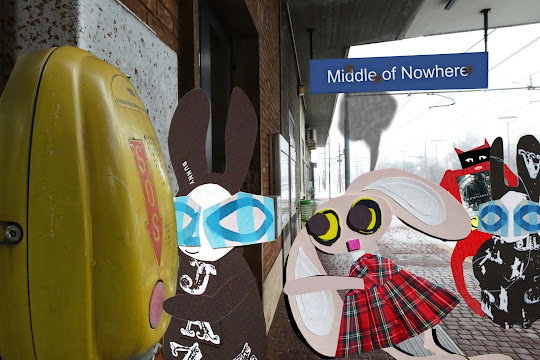 The Wabbit looked at the sign. "This really is the middle of nowhere." Then he paused. "And look, there's a yellow box that says stop just like the one at the tram halt." Lapinette took a good look at the box. She sighed. "Wabbit, it doesn't say stop. It says SOS." The Wabbit sulked. "Well, I spoke to one, and it said it could stop things." Wabsworth chimed in. "Probably it can. It can stop a tram." Skratch meaowed from further along the platform. "Or in this case ... a train." Skratch knew all about signs, signifiers and what they signified. The Wabbit smiled. "Maybe this is an emergency. I'm going to press the button." Before anyone could say anything, his paw jabbed the button and a voice spoke from the speaker. "Ah it's you. Did I stop you being bored, Wabbit?" Everyone pointed at the Wabbit and shouted at once. "This is all your fault!" Lapinette hopped up and down. "Boredom is not an emergency!" The Wabbit waved everyone aside. Then he turned and addressed the box. "Can you stop us being stranded?" "I can indeed" said the box. They heard the tootle of a horn in the distance. The tracks rumbled. Lights changed. A station announcement began. "Arriving at Platform One, special non-stop express train for Torino, Porta Nuova. The Wabbit grinned at Lapinette with all of his 28 teeth. Lapinette stamped a foot. "There'd better be a buffet on this train." "A banquet awaits you in the dining car," crackled the yellow box, "I think you all deserve it." Behind them, a train slid into the station and doors hissed open. But there was another sound. "That box laughed," said Lapinette.
at April 24, 2020