10. The Wabbit and the Fast Train Home 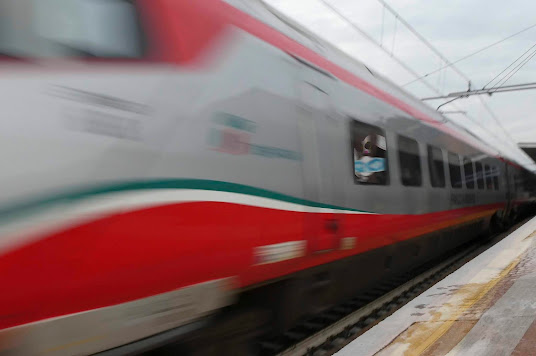 The yellow box was a good as its word. The team boarded the train and made for the dining car where a sumptuous banquet awaited. The train was empty, it was only for them. But the Wabbit lingered behind and snuggled into his favourite single seat at the end of the coach. The train powered up and moved out of the station. The Wabbit gazed at the platform. He could see their footprints in the snow and a thought crossed his mind. "I have a vague feeling we'll all be back ere long." He realised he'd said it out loud and that Lapinette was behind him. "Do you reckon?" she whispered. "I know it in my waters," murmured the Wabbit. The train roared along the track to Torino. Skratch's voice meaowed from the speakers. "We're all waiting in the dining car. Please report. Drinks are on the table." The Wabbit thought it was time to venture an apology to Lapinette. "Sorry about that red button." She laughed. "Where would we be without them?" "Middle of nowhere," grinned the Wabbit. They both looked out of the window. Trees and telegraph poles and pylons blurred past. They watched them for a while. "How long have we been having strange adventures?" pondered Lapinette. "More years than I care to remember," shrugged the Wabbit. The train sounded its klaxon as it pounded through a station. "I'm hungry," said Lapinette. The Wabbit's tummy rumbled and he patted it. "What's on the menu?" he asked. "Prosecco," smiled Lapinette. She pulled the Wabbit to his feet, and paw in paw they made their way to the dining car.
at April 25, 2020