3. Skratch and the Shaking Stairs 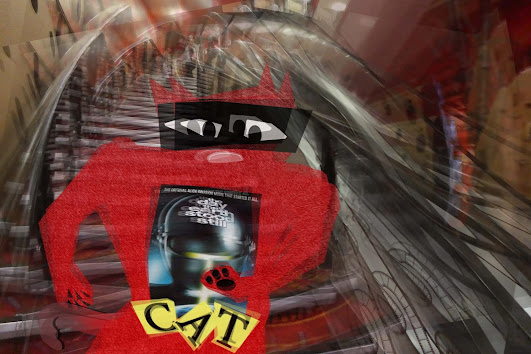 The day was hotter than expected. It was only April but it seemed like a scorching day in August. So Skratch the Cat went in search of air conditioning. "Where else but the cinema?" he thought. He wandered down Via Nizza and strolled into 8 Gallery at Lingotto. It was very quiet and Skratch smiled to himself. "Excellent," he murmured. But when he reached the sales desk there was no-one there. "Afternoon break," he thought and prowled on. As he made his way down to the auditoriums, he could just hear movies playing above the rumble of the escalators. "I'll pay on my way out," he meaowed. Although the atmosphere was electric, he met not a soul. The place was as empty as the devil's heart. "I must be in a  film." Skratch hissed. His purring increased along with his heartbeat. "This is so weird," he growled. He adopted a crouching posture, just in case. Then the escalator lurched and the whole cinema began to shake, pitching him forward. Amid the chaos, the escalator kept going but with enough noise for three. Perspex panels vibrated and tiles fell from the ceiling. Skratch sprang forward and out of the way as the escalator stairs groaned, coiled and collapsed behind him. He twisted in mid-air, landed on his feet and looked back. Then he grinned. "Good thing I'm a cat..."
at April 13, 2020