4. The Wabbit and the Dragon's Ointment 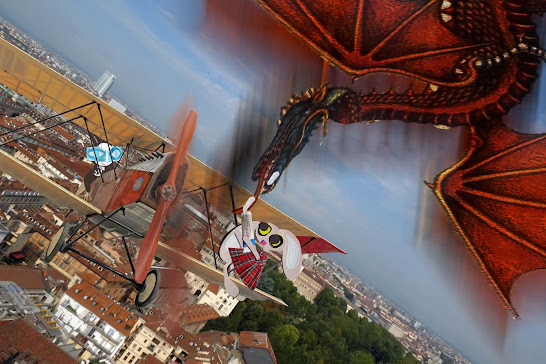 The Wabbit and Lapinette racked their brains for a way to defeat the dragons. They scoured the Internet and unearthed ancient tomes to locate a suitable method but they came up with nothing. Lapinette looked up. Dragons of various hues circled the skies but there was one bigger than the rest and he seemed to be in charge. She pointed. "We have to bring that one down." The Wabbit held up a paw. "I think I have it. Dragons are impervious to magic, but can't stand ointment." Lapinette rummaged in a drawer and clutching a new tube of ointment, hurried to the hanger where Susan the Biplane was ready to take off. Susan circled just below the ferocious dragon. It batted it's giant wings and flew straight towards them but Susan was nimble as only a biplane could be. "What's that ointment for?" asked the Wabbit. "Eczema," snarled Lapinette. "That'll peel its scales," chuckled the Wabbit. Lapinette scrambled onto a wing and unscrewed the cap. Susan hung in the air and waited. "Here it comes," yelled the Wabbit. The dragon's tongue snaked towards Lapinette's head and it was just the moment she'd been waiting for. The tube spat ointment on the dragon's chin and into its mouth. A cry of anguish rose to the heavens. The dragon's neck twisted and thrashed but it couldn't get rid of the ointment. Then its wings drooped as it it turned tail and fell screaming to the city below. "Flew in the ointment?" laughed the Wabbit.
[Dragons (except for Terni the Food Dragon) are courtesy of http://clipart-library.com/dragon-clip-art.html ]
at April 01, 2020