8. The Wabbit and the Deserted Station 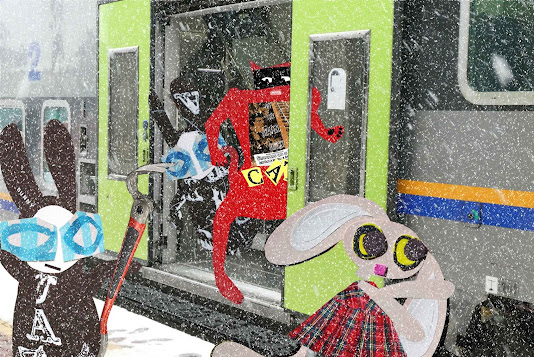 Under a lowering slate-grey sky the train braked to a halt in a lonely station. Snow began to pelt down and lay thick on the platform. The Wabbit sprinted and skidded down the train. He pounded on the compartment door which was well stuck, then he sprinted back to the cab for the wrecking bar. If there was one tool the Wabbit liked it was a wrecking bar, and he set upon the door with vigour and good faith. A crack opened. Then with a hiss, the door slid open - more or less. Lapinette flew through first. The Wabbit pointed up the platform and urged her on, although he didn't know why. He just had a feeling in the pit of his stomach. Skratch was next and halted to ask a question, but the Wabbit shouted and waved him along. Wabsworth looked groggy as he tottered out. The Wabbit pushed him forward and yelled, "Everyone, get to the other end of the platform." He threw the wrecking bar between the sliding doors but it was too late. The doors slid shut just as the train powered up and left the station in the opposite direction. They watched it as it careered down the line, left the rails and hit a dilapidated railway building. The bang was deafening. The train buckled and lay groaning in the snow. Tendrils of smoke rose. Shards of metal dropped through the snow. "There goes our ride home," sighed Lapinette.
at April 22, 2020