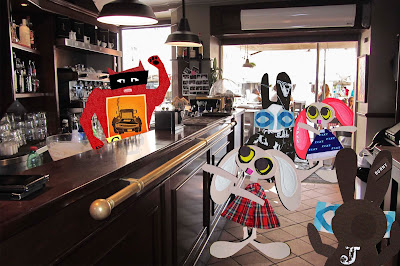 It was blisteringly hot and the team met inside the Adventure Caffè. Skratch the Cat was on duty behind the bar and he welcomed everyone with a mighty meaow. "Ask the question Skratch!" cheered the Wabbit. "I will!" smiled Skratch; "What was that for a sort of freaky adventure?" Wabsworth gently pulled Tipsy into the bar, but she didn't need much pulling. "It belongs to the rather old genre of the road movie," said Wabsworth. "A special representational anchoring, necessarily rooted in recognition," nodded Skratch. "Speaking of anchors, the sun is well past the yardarm," said Tipsy. "I'll get the drinks," laughed Skratch. "The shark was this big!" yelled Lapinette suddenly. She threw her paws wide. So did everyone else. "It looked bigger," suggested the Wabbit. "What happened to the shark?" asked Wabsworth. "I hit it on the nose so hard its teeth rattled," grinned the Wabbit. Lapinette snorted. "It still has a chunk of his fur." Skratch scratched the corner of the bar. "The episodic nature of the adventure provided a staggered lurching, rather like an army truck." Wabsworth chuckled. "It was thematic foregrounding. The protagonists had no control of mysterious happenings." The Wabbit chortled. "The sequence was the adventure." Tipsy lurched forward and spoke directly to Skratch. "Any danger of you bringing me a little dwink?" "Tipsy! That's a trope," meaowed Skratch. "I can take a twope," shrugged Tipsy.
at June 20, 2018