5. Lapinette and the Way to Drive 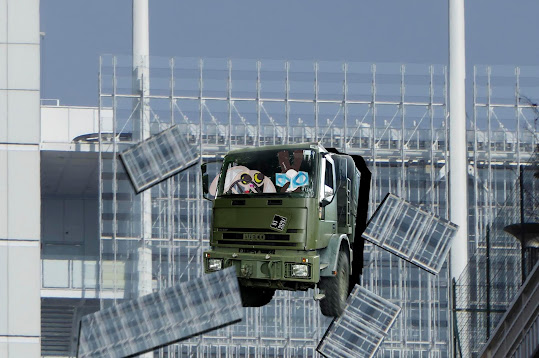 Lapinette drove through the dark and the dark seemed endless. But she saw a chink of light and she drove straight at it. There was crash and a lot of splintering as she hurtled through three corridors, down a flight of stairs and into a luxurious office. A panoramic window loomed. She pumped the throttle, shot through it and braked. The lorry stopped, half in, half out of a tall office block. The Wabbit looked down. "How many floors in this tower?" Lapinette grinned. "Thirty five counting the roof restaurant." "I know this building," said the Wabbit; "It's new. It's bioclimatic." "Not any more." giggled Lapinette. The Wabbit counted the floors. "How do we get down?" Lapinette made a calculation, then winked. She inched the truck forward until it pivoted on the rear axle. Then she gritted her teeth. "We drive down." The Wabbit braced. The truck lurched over until its front wheels touched the side of the building. Lapinette jabbed the throttle. The rear tyres bumped over the edge. She crashed the truck into reverse and stood on the brakes. The truck began to slide down. The Wabbit jerked the handbrake on. Lapinette gunned the throttle. Tyres groaned. Burning rubber fumes made them cough. Suddenly gravity grabbed the truck and it dropped with a slam. "Aaaagh!" yelled the Wabbit. But knobby tyres grabbed at the tower. The truck clung. Then with a squeal like a thousand bats - and a lot of smoke - it slid quietly to the bottom. "This wheel's on fire!" yelled Lapinette.
at June 15, 2018