2. The Wabbit and the Bridge to Cross 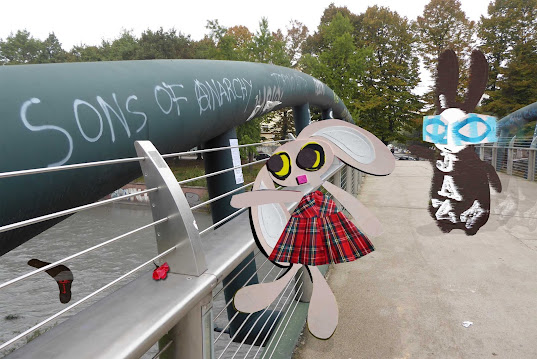 The Wabbit's hop down the river was a formal affair that involved crossing a suitable bridge, then continuing on the other side to the next bridge, then crossing again. They hopped some distance, crossing many bridges until they reached the big University. There, the river became wild and inhospitable and it coursed down to the Po like it was late. The Wabbit studied the graffiti. "Who are the Sons of Anarchy?" Lapinette knew all about it. "It's a crime soaper on cable TV about a motorbike gang." "Now I remember," said the Wabbit; "Hamlet and Harleys." Lapinette glanced down. A rose lay on the parapet and she picked it up. "This is the rose Jenny wears on her pirate hat." "Are you certain it's hers?" said the Wabbit; "They all look alike." Lapinette peered into the swirl of water. "Well, there's her hat!" The Wabbit's fur stood on end and he jumped to dive into the river. "There's no-one, Wabbit. I can't see her," yelled Lapinette. They both raced to the other side of the bridge but they could see only river and woods. The water roared by with a deafening growl but there was no mistaking the bark of an automatic. "Jenny," breathed Lapinette. The Wabbit indicated a point farther down the river. A muzzle flash lit the water and a bullet hit a tree. Branches cracked and birds lifted. "Let's join the party," said the Wabbit.
at June 25, 2018