2. The Wabbit at the Top of the World 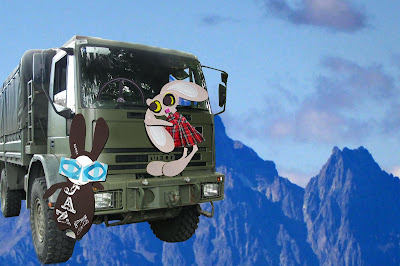 The truck would not behave. Even Lapinette was unable to prevent it shooting upwards until it was some height above the city. It was cold and the air was thin, but the truck's engine throbbed on with a consistent clatter. The Wabbit checked everything inside but there was no sign of modification. He hopped outside and Lapinette followed him. Together they clambered over and under the truck but nothing appeared out of the ordinary. The Wabbit peered down. He made a wry smile then shut his eyes. "What are you doing?" asked Lapinette. "Praying," replied the Wabbit. "Who to?" asked Lapinette. "Any gods I can think of," smiled the Wabbit. Lapinette was quiet for a moment but then she said, "Any reply?" "Nothing whatsoever," sighed the Wabbit. Lapinette shivered. "You'd think up here they'd be able to get through." The truck engine hesitated and wheezed so they clambered back in the cab. With a cough and a splutter the engine stopped. The truck began to fall, slowly at first but quickly picking up speed. City streets rushed towards them. The Wabbit turned away from the window and shrugged. "Maybe a god did answer." The truck's descent slowed and the engine sprang to life. Lapinette laughed. "Deus ex machina?"
at June 08, 2018