3. The Wabbit and the Deep Blue Sea 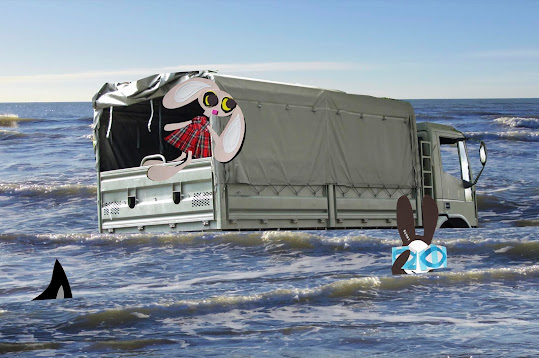 The truck's descent took them over the sea. It was blue. Very blue indeed. And that was all there was. The truck settled on the surface. The engine died and everything became quiet, save for the sound of the waves and something they couldn't identify. "I'll look around," said the Wabbit. Lapinette didn't like the sea. It moved too much. But the Wabbit dived in with a merry shout. "Come on in, the water's fine!" It didn't look fine to Lapinette. The truck rose with the sea's swell and she felt like washing in a laundromat. The Wabbit swam around the truck and back. He shook his head. "Nothing. No explanation." Lapinette smiled. "Maybe it's a magic truck." The Wabbit bobbed up and down. "It didn't used to be." "Did you check the tyres?" asked Lapinette. The Wabbit took in a mouthful of water and spluttered. "I hardly think pressure matters at the moment." Lapinette shook her head. "Maybe there's something inside the tyres." "I hadn't thought of that," said the Wabbit; "I'll dive down and have a look." But Lapinette saw something. "Not just yet. Come back." "I'll do it in a jiffy, won't be long," said the Wabbit. At that moment he turned to see a mouthful of serrated teeth headed straight at him. "Yikes!" he yelled. He swam fast for the truck and grabbed Lapinette's paw. "Are there killer sharks in the Med?" "Seven," said Lapinette. "Phew, not so many," said the Wabbit. "Seven species," sighed Lapinette.
[Background photograph: Camilla Galli da Bino]
at June 11, 2018