1. The Wabbit and the Panoramic View 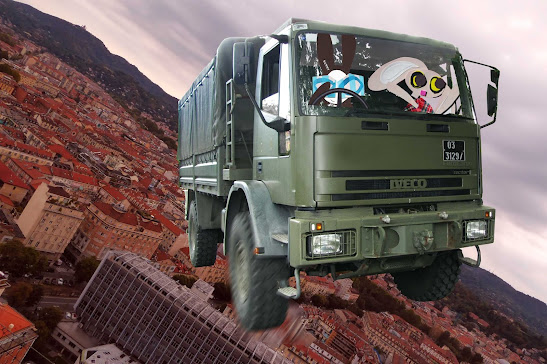 "This truck is still on loan to my unit," murmured Lapinette. She'd reluctantly agreed to the Wabbit's plan to jump it from the top of the hill at Superga. Every jump raised funds for his favourite charity and he was heavily sponsored. He'd done it before, so all being well, things would go to plan. The truck left the ground at the predetermined point and fell gracefully towards a ramp down by the river. She took in the view. "Bella panorama!" yelled the Wabbit. The horizon suddenly tilted as something lifted the truck and propelled them into the air. Lapinette watched the city swirl under the truck. "What the Binky!" groaned the Wabbit. "Turbulence?" suggested Lapinette. She held on tight as the truck wafted sideways over Lingotto. The Wabbit sank back and folded his paws. "No control." He reached for his walkie talkie but it fell and lodged under his seat. "You didn't retro-fit the truck?" asked Lapinette hopefully. The Wabbit grimaced. "On loan." He tried a few switches then pulled the handbrake just for fun. The truck stopped and hung in the air. He touched the throttle. The truck slewed forward. He tried reverse. The truck edged back. Lapinette frowned. "What will make it go down?" Her stomach lurched as the truck dropped. The ground came up fast. "Go up," shouted the Wabbit. Nothing happened. "Go up!" shouted Lapinette. The truck climbed skywards. "Tell your truck to behave!" yelled the Wabbit ...
at June 06, 2018