10. The Wabbit and the Big Spike 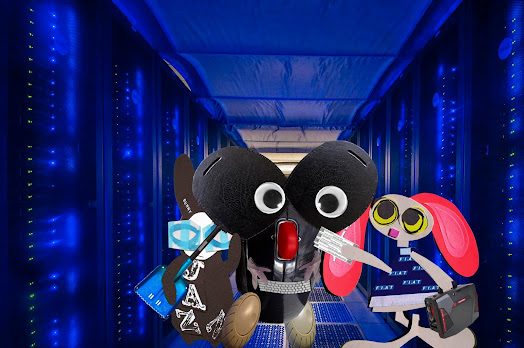 "Nearly there!" said Hardhack. His ratty claws flew across the keyboard as he whistled 'Carolina Moon' This was getting on the Wabbit's nerves. "Is it working?" sighed the Wabbit. "Oh yes," said Hardhack; "This optimistic news will hike the price." He continued to type and whistle. Tipsy flourished a wad of crypto keys and giggled. "We're gonna pump and dump." The Wabbit hopped patiently, clutching a shovel with he'd thought might be useful. He tried to keep up with the bitcoin market jargon, and waited. Hardhack entered all the key numbers. Tipsy opened a briefcase console and interfaced with the servers.  Hardhack nodded to the Wabbit. "OK, Commander. Tipsy just sold you the keyholders' bitcoins. Then you sold them to me. Tipsy bought them back and now I have them." Tipsy checked her console monitor. "We have a spike." She bought the coins back. The spike climbed and went on climbing. "She's mooning!" yelled Tipsy. It peaked, dropped like a stone, then climbed rapidly again. "Now Hardhack! Fly me to the moon," shouted Tipsy. "Selling, selling, selling - all sold." said Hardhack. The spike peaked again, then fell rapidly. "The Market has been suspended," smiled Tipsy. "So who's left with the bag?" chuckled Hardhack. "I think I know," grinned the Wabbit.
[Tipsy is carrying a specially adopted Fang Battlebox, a powerful gamer's computer.  Bag refers to a bagholder, a trader left with low value coins who hopes they will improve in value. Mooning refers to the unwanted spikes in value, Pump and Dump relies on inflating bitcoin value then offloading onto gullible victims. Bitcoin slang can be found here. The background picture is the Chinese Sunway TaihuLight computer. It appears to be a publicity shot, no credit is available.]
at June 01, 2018