6. The Wabbit and Tipsy's Findings 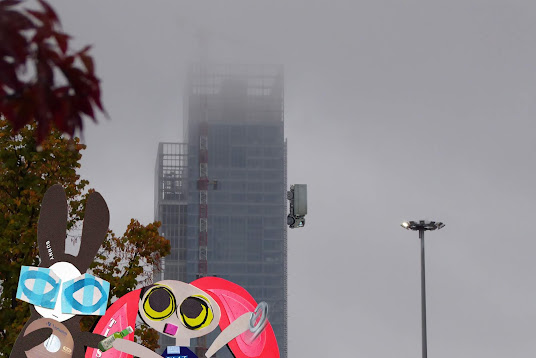 The Wabbit had tasked Tipsy to go over the truck with the finest tooth comb she could muster. Mist shrouded the building and the Wabbit's fur felt damp. "Find anything?" Tipsy laughed and took the miniature whisky that the Wabbit quietly proffered. She tucked it into the top of her frock.  "I found two things." She pushed a CD ROM into his paw. The Wabbit winced because he recognised it. It contained a series of modifications for Quantum the Train's lattice drive. "Don't worry Commander," said Tipsy, "it wasn't anything to do with your CD." She held out a shim. "This naughty washer is a weensy teensy bit out of phase." She spun the shim in the air and it hung for a while. Then it dropped into Tipsy's paw. "But not all the time," she added. "What's it out of phase with?" asked the Wabbit. He shoved the CD ROM deep into his fur with an exaggerated air of innocence. "Us," said Tipsy. The Wabbit looked at the building and then at Tipsy. "Did you try putting it back?" "I made copies," smiled Tipsy, "and refitted every washer in the truck."  Together they watched the truck moving up and down the building. "It's controllable," sighed the Wabbit with some relief. Tipsy raised her whisky miniature in the direction of the truck, then drained it in a single gulp. "For the most part..."
at June 19, 2018