11. The Wabbit and the Leaseback 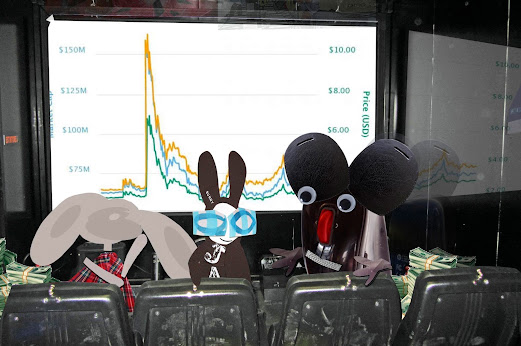 Hardhack Rat and Lovely Lapinette met the Wabbit for a briefing in the secret DWA viewing theatre in Via Nizza. There, they looked at graphs and charts and analysed figures. "The market hardly recovered," said Lapinette. "Collateral damage," smiled the Wabbit. Hardhack was anxious to squeeze more life out the system and the Wabbit looked at him shrewdly. "Would you like to be in charge of my Dinosaur Fund?" Hardhack was delighted. "When do I start?" "Right now," yelled Lapinette. She waved at the chart. "We punished our enemies but innocent investors were caught in the operation." The Wabbit agreed that restitution should be made. Hardhack thought for a second. "I can hack back to the brokers." "That's a start," said Lapinette. "Afterwards, how much do we have left?" The Wabbit flicked imaginary lint from his fur. "€57 million - give or take fees or charges." "Which I am duty bound to minimise," said Hardback. "It's in our Articles of Association," explained the Wabbit. Lapinette raised both eyes. Her ears quivered. Suddenly she waved at the piles of notes. "Where's the rest of the money?" "At the Bank of Despond," said Hardhack. Lapinette gasped. "Our personal guards seized the building," shrugged the Wabbit. "Ours now," laughed Hardhack. Lapinette sighed. "The Department wants that building." "Sold to the Department!" shouted the Wabbit. Hardback's eyes gleamed as he made a note.  " ... and leased back."
at June 05, 2018