3. The Wabbit and Cinema Sales 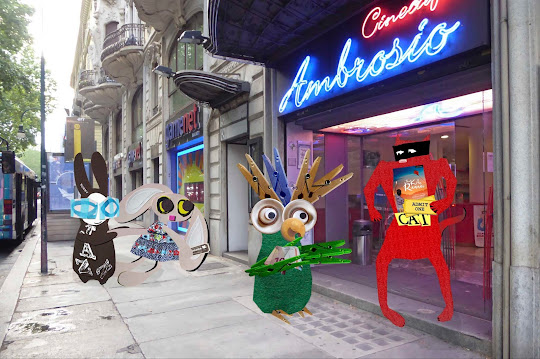 With some folding money under her wing, Peggy hopped along the road asking everyone and anyone if they had anything to flog. So by the time she reached Corso Emanuele, Peggy had accumulated a vast number of useless things and was considerably poorer. The Wabbit and Lapinette shadowed her protectively, stepping in if they thought anyone was taking advantage. Outside the Ambrosio Cinema, they spotted Skratch the Cat volunteering at a film festival. He pounced out immediately. "Only a few seats left, only a few now, roll up, roll up," he yelled. "I'll take the seats," shouted Peggy. "How many would you like?" asked Skratch. He'd sold no tickets whatsoever and he was therefore delighted. "I'll buy your seats," said Peggy, "and anything more you have to flog." Skratch peeled off a ticket and tried to find a programme -  but Peggy showed no interest. "You said seats. I want seats." Skratch scratched his head. "I'm afraid they're all fixed to the floor. But you can sit on a seat and watch the movie." "Yes let's!" said Lapinette, She produced a season ticket from her frock and dragged the Wabbit and Peggy towards the foyer. Peggy protested but Lapinette grabbed a wing and pulled. "A movie is just starting!" shouted Skratch. He led the way with a torch to the front row. "What's the movie called?" murmured the Wabbit. "The Wolf of Wall Street," replied Skratch. "Does he have anything to flog?" asked Peggy.
at August 30, 2017