16. The Wabbit and the Big Drop 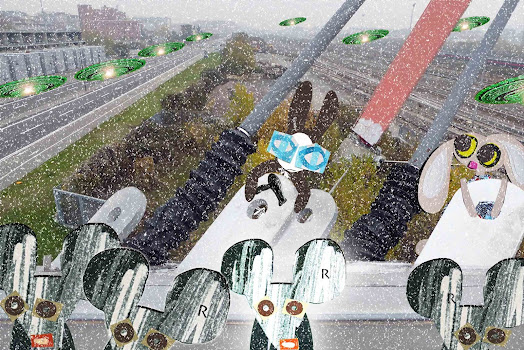 It happened in an instant. Without warning, saucers filled the air and they came thick and fast. The Wabbit and Lapinette were thrown from the bridge. Snow pelted their paws as they clung to the slippery surface. The Ice Mice turned and walked away without a word or a backward glance. "How did that happen?" muttered the Wabbit. His fur stuck fast as frost froze them both in a welcome embrace. The Wabbit watched saucers whizz past and he heard them make a fast-freeze cackle as they span. He slowly hauled himself over the parapet, then turned to lean out. He pulled Lapinette onto the bridge, set her down and murmured, "We need a better plan." Lapinette's frock was a frozen board. "Did we have a plan?" The Wabbit shrugged. "No plan is also a plan." He rummaged in his fur for his emergency fur drier and blasted it around. Lapinette was unimpressed and yelled, "Ears please." The Wabbit blasted Lapinette's ears until they were toasty. "We're making heavy weather of this," he sighed. The snow thickened but somehow it didn't settle. It turned into ice pellets the size of golf balls and clung to every surface of the bridge. The Wabbit activated his fur drier in a ferocious attack using unauthorised settings. It failed to melt a single one, but the snow stopped and the temperature rose. Lapinette was awe struck. "Where did you find that?" The Wabbit grinned ear to ear. "It found me."
at August 09, 2017