18. The Wabbit and the Aftermath 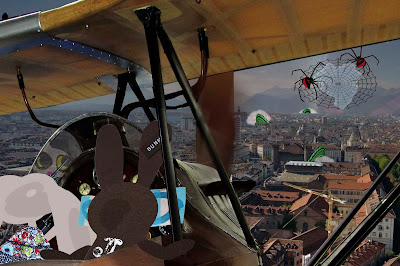 When they flew across the city they knew something had happened. Burning craft lay in several places. In the distance, Duetta's red spiders ferried the ice floe along the mountains. Lapinette couldn't talk to the spiders directly, only through Duetta. So she put in a call. "Marsha Duetta Spider, come in," For a while there was nothing. Then there was a voice, but it wasn't Duetta. "Copy you," Lapinette," said Wabsworth. "I need actual Duetta," responded Lapinette. "Lapinette, standby," said Wabsworth abruptly. The Wabbit heard muffled explosions in the transmission and a lot of shouting. He took the walkie talkie. "Everything under control?" "Yes, Commander," said Wabsworth, "Never a bother." The Wabbit listened to an impossible number of ammunition rounds exploding. Then all went quiet. The radio crackled. "Commander, we had a small contretemps." Wabsworth was the Wabbit's android double and just like him in many ways. But Wabsworth had a penchant for understatement. "A situation has been contained. Advising rendezvous change to Point Delta." "Copy that Wabsworth," said Lapinette, "What situation?" "Ice Mice tried to kidnap the Royal Seal," replied Wabsworth. The Wabbit waited for more information and Wabsworth somehow smiled down the radio. "They tried to seal his fate." "And...?" asked Lapinette. "Our seal is armed to the teeth." said Wabsworth.
at August 14, 2017