20. The Wabbit and Quark Plasma 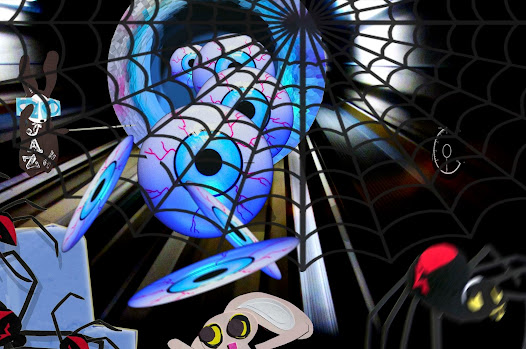 The Wabbit dived for the ledge as an oncoming portal sped towards the team. There was an apologetic bang, but no doubt of the result. Quark plasma disks emerged in number and when they hit the tunnel, they began to spin fast. The Wabbit brought his stick down hard and yelled, "Drop the web." But the web didn't hold. Disks sliced through the tough weave and continued along the path of the decelerator. Lapinette dived for cover behind the ice floe. But the ice floe turned blue and began to melt - so she rolled across the track and quickly joined the Wabbit. "What's that? Do you know?" "That is the opposite of our ice floe," said the Wabbit; "It's a quark plasma stack." Waves of heat assaulted Lapinette's ears. The disks were sharp and silent. When they hit the side of tunnel, they lodged there, still spinning. Walls became soft, but held their form. Neither solid nor gas nor liquid, they hung in a plasma curtain. The ground vibrated. The Wabbit and Lapinette felt the tracks undulating beneath their feet. They were plasma too. Cautiously the Wabbit poked the plasma with his stick. Everything stopped. Disks dropped from walls. The ice floe reverted to arctic white. The tunnel restabilised. "Looks like that's all we get," murmured the Wabbit. He picked up a disk and polished it with his fur. "Think there's a tune on it?"
at August 18, 2017