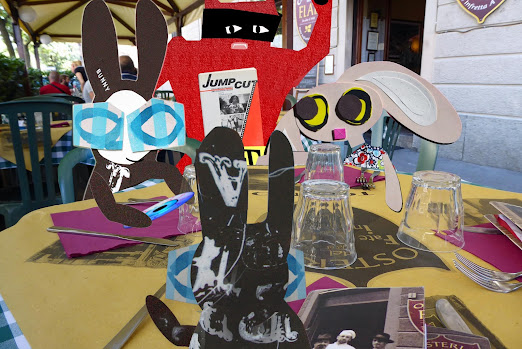 The Adventure Caffe was electric. The Wabbit still had a quark plasma disk and was waving it around. "Nothing on it, it's deactivated," he said, tapping it on his glass. "Only corrupted old files and a bad copy of "Singing in the Rain." Skratch shouted with glee. "Ephemeralisation! Soon we'll be able to make to do with nothing much at all." Lapinette screwed up her nose. "Maybe that's accidental complexity?" she suggested. Wabsworth shook his head. "Just the opposite. It's accidental essence." Now Skratch was more than excited. "But that's exactly the kind of adventure you just had." The Wabbit twitched his ears. "OK. What was the essence of our adventure and what was accident?" Wabsworth was having none of this. "The accidents were the essence and if you take them away, there wouldn't be any essence left." Lapinette nodded knowingly. "So then our Adventure would be de-essentialised, because the complete adventure was identifiably and substantially accidental." The Wabbit laughed long and hard. "We consistently and persistently maintained accidental essence throughout." Skratch was delighted. "We worked very hard at it. Aristotle would be delighted." The Wabbit looked round impatiently, because no waiter had appeared to serve them. He tapped the disk loudly on the table. Nothing whatsoever happened. "Looks like accidental service," grinned the Wabbit.
[From an idea by Michael Durrant. Mind, Volume LXXXIV, Issue 1, 1 January 1975, Pages 595–600.]
at August 23, 2017