19. The Wabbit and the State of Matter 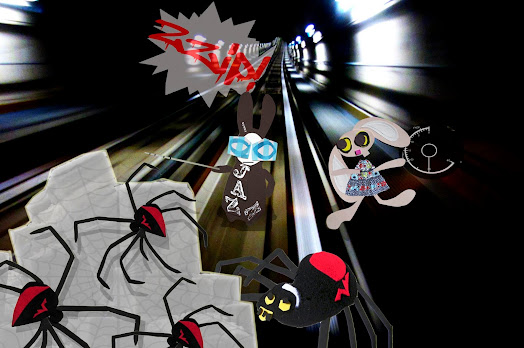 Deep in the mountains lay an important and very secret installation. At the Wabbit's behest, the Department of Wabbit Affairs built a particle decelerator - and allowed the Wabbit to modify it. "It needs to be straight on the rails," yelled the Wabbit, waving his stick. The red spiders patiently adjusted the ice floe. Measurements indicated it wasn't really cold, but it felt as if it was. Lapinette adjusted the timer carefully and said - as she always did at this juncture - "Do you think this will work?" "I tried it using a vase," said the Wabbit. Lapinette's face was a question. The Wabbit looked up in triumph. "All the bits came back!" "Bits?" He hesitated. "Powdery bits." "Ready when you are," called Marshall Duetta. The Wabbit stepped away from the track and lifted his stick. "On my mark." Lapinette activated the decelerator. Nothing appeared to happen. But the Wabbit knew the ice floe had been and gone and come back. An ozone smell wafted through air and sounds of sizzling like frying sausages. "It's different," said Duetta. She tapped the floe lightly with a leg. A hollow sound echoed through the tunnel. "Stand back," said the Wabbit. He raised his stick. Lapinette re-activated the device. Again, nothing seemed to change. But Duetta rattled her legs. "It's come back exactly the way it was." "The Wabbit pointed his stick down the tunnel. "Then what's that over there ..?"
at August 16, 2017