4. The Wabbit and the Film Intruders 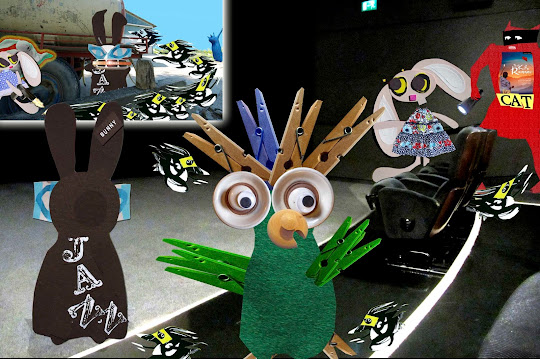 Peggy rushed into the cinema and greeted the few people there. "Anything to flog? You got anything to flog?" The small audience thought this was for charity and viewers rummaged in pockets and bags. The Wabbit was watching the screen. "What is this, Skratch?" Skratch pointed his torch. "It's Casorzo, based on one of our adventures. This is a study clip." On the big screen, Lapinette rained automatic fire on scuttling creatures - and all the while a harmonica wailed the tune that led to their demise. It made the cinema shake - and that's when something caught the Wabbit's eye. A Skuttle quietly dropped from the screen and scuttled between the seats. Then another. "Did you see that?" Lapinette felt something fasten to her leg. "Yow! Get off!" she yelled.  A violent kick from her right foot sent a Skuttle spiraling towards the projectionist's booth. Skratch lashed out too. "Foreground that!" he yelled as he bludgeoned a Skuttle with his torch. Peggy looked down as a creature nibbled her pegs. "Anything to flog?" Her foot stamped down. Her pegs clamped and tightened. "Anything?" A long drawn out screech echoed round the theatre. "Nothing to flog," sighed Peggy. But the Skuttles continued to drop from the screen. One turned insolently. "Spo-de-ode. Spo-de-ode." Then he headed for the door as they all streamed out. "I guess they're not waiting on the main feature," said the Wabbit.
at September 01, 2017