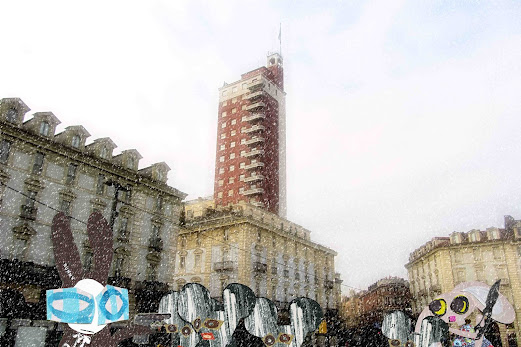 The Wabbit hastened across the city to the rendezvous. It was becoming extremely cold and lazy snowflakes clung to his fur. Lapinette had lagged behind to explain something to Skratch the Cat. But now she hurried to catch up - and there they were, just behind the Wabbit. The Ice Mice were impervious to snow or any other weather and they hopped in his steps as the downfall grew fiercer. "Wabbit" shouted Lapinette. The Wabbit wiped snow from his fur and turned. Then he smirked at the three Ice Mice. "Hiding behind a rabbit's back is extremely poor form." He pulled an automatic from his fur. "This is my friend Mr Makarov." An Ice Mouse made a bee line for the Wabbit, but cold steel against his throat changed his mind. "Going somewhere?" growled Lapinette. The Ice Mice lolled around casually, like a bunch of gangbangers in a grotty ghetto. "Message for the Wabbit," said one. "Phone my secretary," snorted the Wabbit. "Call off your eight legged freaks," said an Ice Mouse who was struggling in Lapinette's grip. "Give us our ice and we'll be on our way." Lapinette held an ear and traced patterns with her blade in the creature's fur. "Why do you want the ice?" No-one spoke, so she poked the blade around. "Aaaagh!" yelled the Mouse; "It's spin ice." The Wabbit signalled to Lapinette. "Spin ice?" Lapinette ran a paw along the edge of her weapon. "Spin ice is quantum disordered ice." "The worst kind," sighed the Wabbit.
at August 07, 2017