21. The Wabbit and the Quark Stack 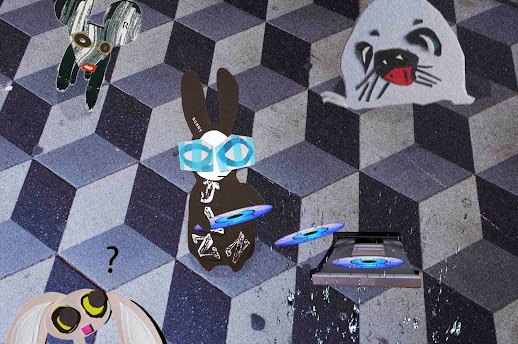 "Where are we?" asked Lapinette. "In the quark stack," said the Royal Seal.  "I don't like it here," said an Ice Mouse. "It's all your own fault," said Silkie the Royal Seal. The Wabbit shrugged. He fished in his fur and pulled out an ancient CD player. Then he flicked a quark plasma disk into the player. It began to play an orchestral movement that Lapinette recognised. "Water Music." The atmosphere became damp and a bit sticky. Moisture seeped from the player. Droplets flew up then fell like rain. But it wasn't rain. "That's ours," croaked the Ice Mouse. Silkie laughed. "Take it if you can." The Ice Mouse tried to jump but slipped on a fine plasma film and fell over. "It's anti-rain, said Silkie. The Wabbit grimaced. "That's what the Ice Mice wanted." The Wabbit took the disk from the player and the plasma rain ceased. He put in a different disk. It played "Riders on the Storm" and rained in a tropical manner. Silkie's voice was stern. "Commander, this is what happens when you fail to submit timely mission reports." "It rains?" asked the Wabbit. Lapinette giggled, but Silkie barked, "All this could have been sealed and delivered six years ago." "Water under the bridge," smiled the Wabbit. "Don't let it happen again," said Silkie. The Wabbit plucked the disk from the player then flipped another one in. "I get to keep these, don't I?" "For a rainy day!" shouted Lapinette. And even the Ice Mouse laughed.
at August 21, 2017