2. The Wabbit and the Excellent Deal 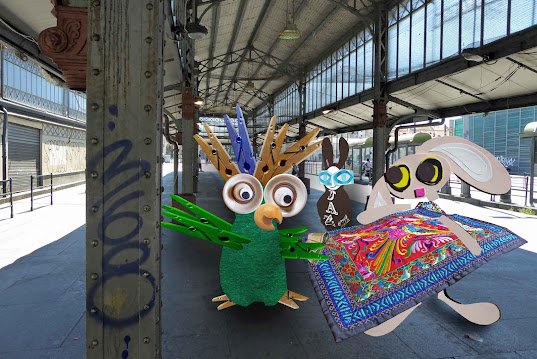 The Wabbit headed for the market in the company of the bird, who wouldn't go away. "Anything to flog?" repeated the bird. "I'm going to call you, Peggy," chirped the Wabbit. At that moment, they spotted Lapinette, who'd been helping her cousin Vinnie at his sales outlet. Peggy spread her wings. "Anything to flog?" Lapinette was delighted. "As it happens I do." She flicked a colourful piece of fabric that hovered weightlessly in the air. "I can see you're a bird of considerable taste," she said. "This fabric and design is unique. You won't find one like it anywhere." The Wabbit watched all this with humour and waited as Lapinette continued. "My cousin held this back for a buyer but he's lost in Peru. I can let you have it for a song." Peggy trilled a song and held out a wing. "Plus 50 euro," said Lapinette quickly, "It's stain resistant, washable and drip dry." Peggy produced 50 euro in notes and made a grab for the fabric. Lapinette quickly snatched it away and hopped back shouting, "It's uncrushable, travel proof and the colours never fade!" Peggy seized the fabric and a tug of war broke out, which she won. She carefully tucked the fabric in the iron grip of her other wing and gave Lapinette the cash. Lapinette peeled a ten euro note from the bundle and gave it to Peggy. "Special discount. Vinnie says always give one." Peggy held up the ten euro note and waved it at Lapinette. "Anything to flog..?"
at August 28, 2017