4. The Wabbit and the Devil's Herd 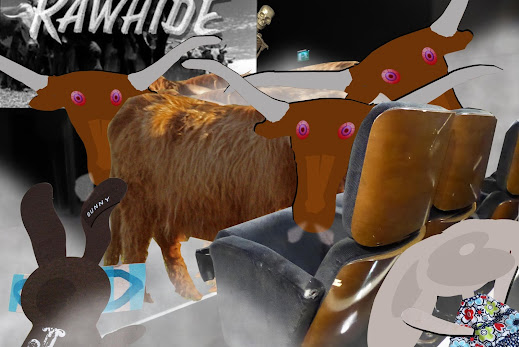 The Wabbit fumbled with the skeleton key and a door creaked open to a blare of sound from giant loudspeakers. "Rollin' rollin' rollin', Rollin' rollin' rollin." But there was more. The panting smell of hot breath was as loud as the music. "The Devil's Herd," gasped Lapinette. Long horns clashed like swords. Hooves beat a chant on the cinema floor. A steer looked at the Wabbit square on and his nose pumped fiery breath across the seats. And then it spoke in a low moo. "Is this Cinema Twelve? We're booked for The Devil's Doorway." A frantic bellowing followed as cattle shuffled in anticipation. But the Wabbit had simply no idea what cinema they were in. "Perhaps it's a trailer or a short," he suggested. Then he had a thought. "Why don't you take your seats while I nip down to the foyer and get you tasty treats?" The Devil's herd swished their tails as they milled around. Not without some difficulty, they sat down and mooed to each other about movies. "I'd rather see Duel in the Sun," said a steer. "Oh I know," said another, "we always get stereotyped. We're constantly typed as stampeding." But another steer, more aware than the rest, noticed a skeleton lurking behind the screen. "These Bone Riders are a menace," he said to the Wabbit, "they're after our hides." The Wabbit laughed. "Well bless your beautiful hides," he said. Then he smiled and murmured, "These bags of bones are on a hiding to nothing."