8. The Wabbit in the Dream House 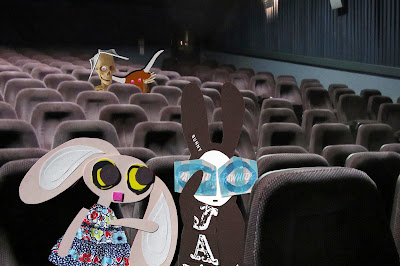 "You were sleeping," said Lapinette. There was no reply. The Wabbit shifted drowsily in his seat and mumbled. "They're coming." Film credits rolled on the screen. The lights came up. The cinema gradually emptied. "Who's coming?" asked Lapinette finally and she dug the Wabbit in the ribs. The Wabbit jumped straight in the air. "Aaaagh! Skeletons! Run!" Lapinette sighed. "We're at the cinema. It's Wednesday Westerns. The programme's just finished." Music filled the cinema as adverts started. "No skeletons?" queried the Wabbit and he shook his head. Lapinette shook her head too. "No skeletrons." The Wabbit thought for a second. "Then what about the stampeding steers?" Lapinette smiled, "Not here. They were on the screen, in the film." The Wabbit glanced around uneasily. "But I saw cattle, tearing up the cinema seats." Lapinette smiled again. "In the movie, cattle stampeded through a town. They trampled the sheriff, then destroyed several barns and a saloon." The Wabbit looked sceptical and gestured behind him. "Then can you tell me who they are." "They just came in," said Lapinette. "They're here for the Rocky Horrorthon." Now the Wabbit smiled and sang. "Let's do the Time Warp again!" "Later!" grinned Lapinette.
at October 12, 2016